I just got back from RailsConf 2008, which was held in Portland again this year, and I have to say I had a really excellent time. I met tons of really cool people, had a hundred conversations about Git and Ruby and consumed a fair amount of Drop Top.

In addition to that, my talk went as well as I could have hoped. The place was packed, I talked on the second day after they had extended the rooms and the room was still almost totally full. The presentation went off without a hitch and dozens of people came up to me through the rest of the weekend to say they enjoyed it, so that made me feel really great.

One of the awesome guys that I met there, Daniel Wanja of OnRails.org, was kind enough to take some video of my talk, if you're curious how I present or how many people there were: 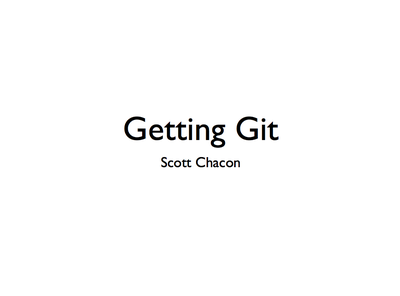 There were about 520 slides that I went through in 55 minutes (went a tad bit over the time limit) and some of them had moving pieces, meaning I probably clicked that clicker at least 600 times during that talk.

Update: I've recorded my basic talk over the presentation of the full slide deck and posted it as an episode at GitCasts, if you want to see the whole thing.

So, now I go back to work, but I enjoyed myself and met a bunch of great people and learned a lot about DataMapper, Erlang (Fuzed and Vertebra), and even a little Ruby... I also got to whine at Chad Fowler about the sessions not being videotaped, which he commiserated with me on. Lastly, I wanted to point out that for those of you who missed Nick Kallen's talk on ActiveRecord at the very end of the conference, you missed out on a really well done live coding session - probably the most informative and well presented Ruby learning I've had in months.